NPC athletes are regularly featured in and on the covers of international publications such as Muscle & Fitness and Muscle & Fitness Hers, Muscular Development and Fitness Rx for Women. The Men’s Physique and Women’s Bikini Divisions have launched the NPC into the mainstream. Our NPC competitors in these divisions can be seen in national magazines, ad campaigns, etc. Plus, it is not uncommon to see major professional athletes and A-list celebrities such as Dwayne “The Rock” Johnson appearing at our events.

You have two choices in obtaining your NPC card. See Information below. If you have any questions about an NPC card please address them to npcfirst@npcregistration.com

If you purchase your card online ” you will not receive a hard copy” in the mail or an email copy. If you did not print out your card at the time of your transaction, you will have to go back into the site using your email address and password, click on log in, click on membership card and print out your card – www.npcregistration.com

To join the NPC, print the application below, complete it, enclose a check for $150.00, and mail to: 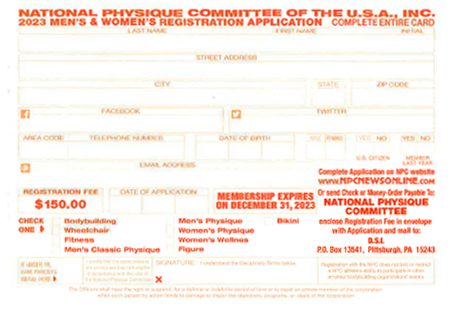 For inquiries regarding NPCnewsonline.com email us at npcnewsonline@gmail.com

Join the NPC
Find a Contest
Find Your Chairperson
Rules